Many people have asked about using my music for their videos. I make my music free for any syncronization with any non-commercial video on the internet, and for works in film festivals, via a Creative Commons License. These are simply a couple of examples of work that I particularly admire.

This is a video for The Whitest Boy Alive’s (featuring Erlend Ã˜ye) standout track “Golden Cage”, illustrated and animated by Geoff McFetridge

Also in deservence of praise is the work of Australian director Stephen Watkins in his video series Backspace: 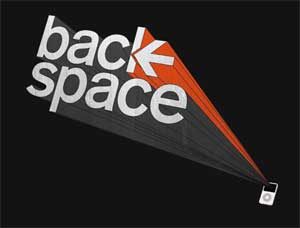 This Just In: Podington Bear Considered

In the P Bear news room:

On NPR’s Morning Edition: Recording a Song a Day, Every Day

And by coincidence, the same day on NPR .com, and via the popular podcast, All Songs Considered featured P Bear’s “Robot Park”.

And over the weekend, a telltale sign of gathering curiosity: #5 on the iTunes Music Podcast Chart. A new record!

And not least there’s a rumble in the forest of cyberspace from stumbleupon.com a site referring hundreds of to the front door of Podingtonbear.com. What is this stumbleupon? Did you find me with their help?

Coming soon: You can help me decide whether or not to make CDs… 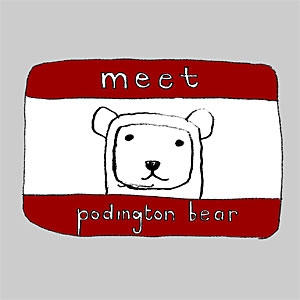 For those of you who have been tuned in for while, this may represent nothing new. It is after all, simply the first fourteen songs of the Podcast (released in January for free) packaged in a commercial container, where it was once free. Well, what can I say? The bear giveth and the bear taketh away.

But like my music, which some have called gentle, I am pleased to report that this album (and others to follow, month by month) will sell for the gentle price of $7.99. (Apr 6– For somreason iTunes reset the price to $9.99. I’m not sure why.) Also, many of you will note the new podcast episode for Jan 31 entitled “Meet Podington Bear” which contains a satisfying mix of long (2 minute) samples from all these songs you came to know me by in January. I hope this will smooth the transition from gratis to commerce.

May I ask something of you? Would you consider supporting me with kind words if you have enjoyed my music for free via the podcast? (It would be kind of silly for you to purchase this album if you already have all the tracks, though it has been professionally mastered, and touched up in general.) I would happily accept as payment for those free songs a supportive comment on the iTunes Music Store Page where this album resides. Many of you have left such nice comments on the podcast page. Perhaps some of you who have considered doing so, but didn’t for whatever reason, may take this as a fresh opportunity! My little album cover looks kind of lonely right now.

Future albums will have some bonus tracks or remixes thrown in to up the ante.

This Just In: Some dude, sellout, or magical musical creature?

From Small Good Things:
“There’s no reason you should know the music of Podington Bear (a play on the word “podcast”). The elusive electronic artist doesn’t have a bio and has never revealed his (or her) real name. There’s no label or record deal, no publicity machine, and when I contacted him/her by email asking about an album, the reply I got explained there would be no CD because it would be a waste of plastic. The email was signed “P. Bear” with the signature line “I’m just a regular bear.”

Okay. It’s a little cutesy, and maybe even worthy of an eye-roll or two if you lack patience for artistic license. But the music is so good, I’ve found it easy to suspend my disbelief that this is just some dude living in his mom’s basement and imagine it’s actually from a magical, music-making creature.”

From Wired.com:
“Podington Bear, who writes three songs a week distributed them via free podcast (also available on iTunes), has an interesting idea for ad-supported music that, as one might suspect, does not involve wrapping songs in a prickly layer of digital rights management.

His proposal is that the Album Art tag embedded in MP3s and other file types be used for an unobtrusive advertisement that wouldn’t be rejected out of hand by ad-resistant digital media consumers. It’s a clean, simple idea that’s easy to grasp, but it’s worth reading his explanation on its own merits.

If anyone with access to a small ad budget wants to try this out, he’s currently accepting offers for this exact type of advertisement.

Given that his podcast is currently ranked #13 on Apple’s music podcast chart, your image could potentially show up on quite a few computers and iPods. For the month of March, the going rate is $100 for individuals or $200 for businesses:

“Individuals may, for example, attach a picture of their baby, or dog, or motorcycle and some text to my song or… the skyâ€™s the limit. Likewise businesses may simply submit their logo and url link, or a napkin drawing, or stock photography. For more on this pitch, including stats and photo illustrations you can download this handy PDF. Iâ€™m just the court musician.”

From Commodities of The Abstract Sort:

“Podington Bear is an anonymous Portland artist who is putting out a new instrumental electronic song by podcast every Monday Wednesday and Friday of 2007. Iâ€™m usually not a fan of instrumental music, especially of the electronic variety, but I enjoy the vast majority of Podingtonâ€™s stuff because he/she doesnâ€™t try so hard to have every possible sound effect in every single song. I really admire someone who has the dedication to turn out consistently good music three times a week for an entire year. Recently on his/her blog Podington laid out a plan to save the slowly dying music industry through a system of patronage wherein an album would be released song by song for free with advertisements instead of album art. After all the songs had been released an advertisement-free version of the album would be available for purchase both in digital and CD format. These sounds like fightnâ€™ words to me; people will see this system as another way for indie bands to â€œsell outâ€ even though it is actually benefiting both them and the bands because they are getting free music legally and the bands are getting paid. Either way Podington is trying it out by soliciting patrons for the music he/she puts out from March on, it will be interesting to see how it all works out”

The Sonic Spotlight recently featured Podington in a podcast.

Thanks all! -P Bear

The early songs will lose endings & Word of mouth.

With regard to my podcast, one day soon the tracks which many of you came to know me by, namely those released in January and February, will be hosted as long-form samples only. That is to say, downloading them from the podcast, through links, or listening to them on the player will reveal only 2 minutes (or 3/4 the length, for shorter songs) of their running time before they fade abruptly.

So, consider this is your warning. It will happen at this bear’s discretion without further notice. Therefore, if you know anyone who you think would enjoy these early tracks in their entirety (for free), please steer them in the right direction.

The motive and design is simple. As the podcast ages, the songs will be released as albums on iTunes (and other digital retailers) collected by months and re-titled (also according to my

whim.) As discussed earlier, February’s songs shall be henceforth known as Liquid Gold. January: Meet Podington Bear. These albums will be professionally remastered and in some cases the songs will be remixed. I may even include a bonus album-only track or two. Stay tuned for cover art.

Since The Podington Bear Podcast reached #13 on the iTunes Music Podcasts Chart in early February (thanks to editorial placement and a few blog mentions) it has enjoyed a decent showing on the top 100. Most recently it has hovered in the 60’s. I was pleased to note that it is climbing again and presently sits at #24. I thought perhaps I could attribute this to word of mouth, but digging a little deeper I see that the kind folks at iTunes have made a little banner prominently featuring my mouth and nose, no less.

Nonetheless I’ve got a hunch that the only way I can expect to truly attract a larger, true-blue listening audience is by word of mouth. So if you’re enjoying this sonic journey , all I ask is that you let ten or twenty people know.