I needed to recharge my batteries before finishing what I set out to do. Here’s how it’s going to go down:

1: I’m going to finish the remainder of the October collection, now known as Make Out Music. It will go to print and be sent to box set buyers by the end of the year.

2: In the remainder of the year I will do some remixes of Portland artists that I like for the podcast. Programming will probably be irregular. But expect about 14 remix/treatment tracks.

3: I will finish with an album (the 10th proper, and final for the box set) in January & February. It will be my swan song.

ps. Album #8 (September) has been titled Mixed Bag and will be mailed out later this week. I’m listening to it right now. I hope it’s not too immodest to say I’m proud of what I’ve done. I hope it brings you joy.

Just letting you know I’m still here, working on my tunes. They’ll be up later today.

I was happily surprised to find the following on YouTube. I enthusiastically support the use of my songs for video work, personal and commercial. Here’s some of both. Keep them coming! Let me know how I can help.

I really like this one. It is short and sweet. Well acted and cut and I think it dovetails with the music nicely:

This one I posted about before. My first paying gig. This director’s cut features a little more slapstick ‘puppetness’ than the version on the Paul Frank website.

And this is a nice abstract one featuring the pretty lights of the world’s tallest ferris wheel.

Wait a sec. How many figures?

From a recent Wired.com article:

“If you download the rapper Plies’ debut single over the next few months from a P2P network, chances are you’ll see a Sprint logo as the song plays on your computer, iPod, or cellphone. That’s because Sprint and Atlantic Records will use ArtistDirect’s Media Defender software to push 16 million copies of the song onto P2P networks over a three month period…As part of the deal, Sprint will pay a “substantial six-figure” fee, to be split between Plies, Atlantic, and Media Defender.”

Blogger Eliot Van Buskirk kindly mentions Yours Truly had a nearly identicle idea which I outlined (see also Wired article) earlier in the year, which they obviously stole. (kidding…mostly.) I have to confess I’m not familiar with Plies, but he must be famous. What I don’t get is the part about “pushing”. Peer to peer networks are, as far as I know, demand based. Files propagate based on how many people want them. So this sounds fishy to me. But whatevs. Psst. Hey Sprint, I’d happily ‘push’ a P Bear song with my own proprietary technology for .05% or 1/2000th of what you’re paying those guys. Assuming the fee was, say $400,000, that would net a bear an all-I-ever-asked-for $200. (Sure I’m no Plies, but they still would have got a press release that may have been picked up like this one was [The NY Post>all over the net].)

It’s enough to make me wonder if I’m spending too much time making music. The truth is that’s all I’ve done (apart from the undisclosed regular bear work) until last week when I resumed a little PR activity to coincide with my halfway to goal status, but either my pitch is wild, or people need to more time to digest. Probably a little of both. If there’s any solace it may be that after 100 songs made with love and care (I’m sincere about that part) letting it fade is just too big a pill to swallow. And, I’ve got more ideas where that one came from (but maybe I won’t publish them anymore).

Are you a sales/marketing whiz with connections to people / agencies / companies who:

A) program their TV spots with appealing, left-of-center instrumental music?
B) would consider supporting a musician with advertising contributions with logos as album art?

ps. Okay, just peeped the Plies site. I’ve definitely heard his single “Shawty”. The site says if you pre-order his album, he’ll call you personally. Pretty classy, and old school, I have to admit. This video (explicit) of him explaining the deal is worth a look. I can’t say I’m a fan, but he’s pretty charming. Good on him.

pps. The more I look into this, the more I find fishy about it. The company in charge of the ‘rollout’ of those 16 million singles has mostly made a name for itself as a suspected agent of entrapment schemes for the MPAA and RIAA. Any way you look at it, it’s a double standard for Atlantic to both encourage and prosecute P2P users. How is one to know if they are downloading the sponsored tune, or the trojan horse? And wouldn’t the halo effect of encouraging P2P for one song be more copyright infringement–why stop at the single if the album torrent is right there next to it? Lastly, I’ll go on the record for downloading a Plies single or two to see if it had a Sprint logo on it. Nope. Not yet, anyway. I can’t shake the feeling that this isn’t going to make the six figure splash they hope it will. The kingpins of the P2P community appear to loathe Media Defender and are likely to block any attempt to co-opt their cyber-frontier networks, even with this olive branch gesture. I still think the evolution of the recorded music business model has to start grassroots, not six figures.

*including bonus tracks and remixes available on the CD box set and iTunes albums.

2. I’m introducing a discount on the box set for people who purchased one or two albums on iTunes or other another digital retailer. Simply forward your email receipt to polyfreemusic@gmail.com and use the discounted buy buttons on this page to make your puchase

3. I’ve licensed some tracks to Paul Frank Industries. They are now the soundtrack to this short movie about their whimsical puppet mittens. Go here and click on the monkey. 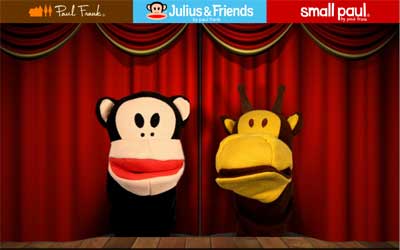 4. Gosh, I’m thinking about taking August off. Would anyone mind? (I’d still finish a year of posting tracks every other day, just not consecutively… and subscribers can rest assured they’ll recieve the complete set of 10 discs.) Maybe it’s just the Monday 99 tracks blues. I dunno. I guess part of the stunt is to do it consecutively. Just a little warning in case, I guess.